Have you been thinking of getting an air purifier?  We recently bought a Blueair Blue Pure 211+ air purifier, and I’d like to share my initial thoughts with you.

This article contains affiliate links. If you click a link and buy something I may receive a small commission at no extra cost to you. As an Amazon Associate I earn from qualifying purchases. For more information please see the Disclosure page.

Why did we want an Air Purifier?

We have a dog and a cat and live in a fairly dry, dusty area so buying an air purifier has been on our mind for a while.
But we always put it off.

Unfortunately, now a wildfire is raging near our city and the outside air is thick with smoke.  The smoke is seeping into the house.

We wanted an air purifier that would deal with animal dander plus help with smoke.


Why did we choose the Blueair Blue Pure 211+ air purifier

We wanted this Blueair Blue Pure 211+ after we saw it in Consumer Reports magazine. It was their second highest-ranked air purifier and about 1/3 the price of their top-rated pick.

This Energy-Star air purifier uses a HEPA filtration system to remove 99% of particles.

According to the Environmental Protection Agency (EPA), a high efficiency particulate air filter (HEPA filter) can, “… remove at least 99.97% of dust, pollen, mold, bacteria, and any airborne particles with a size of 0.3 microns (µm).” (Direct quote from here.)

The “+” at the end of the name indicates that it has an additional feature… and that feature is the carbon filter which filters out smells.

So this model filters air particles, and the carbon-containing filter allows it to filter smells too.

This is the feature we were looking for to help combat the smell of wildfire that was seeping into our house. 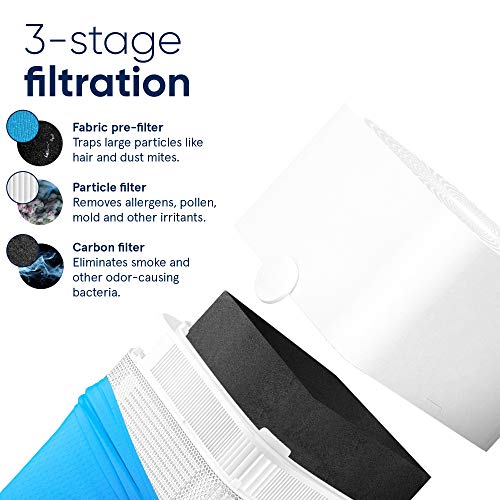 How do you work this device?

The Blueair Blue Pure 211+ has a 3-speed fan that sucks in air through the bottom of the device, the air gets filtered and then the clean air is exhausted up through the top grill.

You can see in the picture below the clean air coming out of the top grill is making some tissue paper wave and flutter.

And it is super easy to control the speed of the unit.

The circular button on the front of the device is the only control mechanism on the air purifier.

You push once for low speed.

Then push it again to turn it off.

That’s it. That’s how easy it is to work this unit.

There is a small light on the top arc of the push button control to show you what speed you’re on.

Below is a picture from the manual talking about on/off and speed control.

What is the blue fabric wrapped around the bottom of the air purifier?

The blue fabric on the bottom of the device is a cloth pre-filter. It helps catch large particles and will help prolong the life of the HEPA filter inside the unit.

The Blueair Blue Pure 211+ came with a blue pre-filter and a black pre-filter. I chose to put on the blue one.

These cloth pre-filters can be vacuumed, or they can be removed and washed in the washing machine on a gentle, cool water cycle. (Reference)

What size of room will it purify?

The Blueair Blue Pure 211+ is rated to purify the air in a 540 square-foot room (with closed doors and windows). It will filter the air in a 540sqft room 4.8 times in one hour. (Reference)

This is important to keep in mind because our house is bigger than 540 sqft, so you may need a couple of these units throughout your house, or be strategic on where to place them.

This term of Clean Air Delivery Rate (CADR) was new to me.

It basically means how much clean air the air purifier releases per period of time on its highest speed setting. (Reference)

It is measured in volume of clean air released per unit of time. For instance, cubic feet per minute or CFM.

The higher the CADR means the air purifier can work faster to clean the air.

The Assocation of Home Appliance Manufacturers certifies air purifiers as part of the AHAM Verifide program (yes they spell Verifide like that). They test how well an air purifier removes smoke, pollen and dust (small, medium and large sized particles) and assign it a CADR level. (Reference)

So if its dealing with any one of these particles it can filter and pump out 350 cubic feet of clean air per minute.

How well has the Blueair Blue Pure 211+ worked for us?

Did I do lab-type experiments on this air purifier? No. I put it to work in my house just like you’ll be doing.

Here are my thoughts.

Did it work from Wildfire smoke?

The Blue Pure 211+ worked well to help get rid of the wildfire smoke smell from our house.

You can’t expected an air purifier rated for 1/4 the size of our house to clean all the air in our house.

So I needed to temper my expectations once I learned this simple principle.

For instance, we’d put the air purifier in our bedroom about an hour before bedtime and close the door. Then when we were ready for bed the air in the room was fresh and clean.

And because it quiet on the low setting we let it run overnight. The low drone of the fan was like a quiet “white noise” machine.

Did it work for cooking smells?

I really don’t know why this happened but I bought some cod fish and when I took it out of the package it stunk up our house. (It was within date and not rotten. Weird.) I hadn’t even burnt it like I usually do.

The Blue Pure 211+ didn’t do a great job of eliminating this smell.

BUT… I think that had more to do with the square footage issue I mentioned earlier.

The device is rated for 540 sqft but our house is bigger. So once that fish smell permeated throughout the house, it simply spread too far for the air purifier to suck up all that air and clean it.

If I would have acted faster and “quarantined” the smell to just the kitchen by closing doors I’m confident the Blue Pure 211+ would have worked better to de-stinkify the air.

Now I know for next time (if there is a next time).

After one month with this unit I can say, yes I would buy the Blue Pure 211+ air purifier again.

I have been happy with its performance of dealing with the wildfire smoke.

But I learned, and you’ll have to know this too, is that if your house is larger than 540sqft (which most are), you’ll need more than one unit to purify the air in your home.

(Amazon does sell it as a 2-pack where you’ll save some money compared to buying two units separately.)

Or you can try to cordon off your house into segments and use in just one portion of your house at a time. (Remember it works in closed spaces so this process may not work in large, open-concept houses.)

I haven’t needed to replace the filter on this unit yet.

The LED light will change to red when its time to change the filter. And it hasn’t done that yet.

So I can’t comment yet on how easy or hard that process is.

Where to buy the Blueair Blue Pure 211+ 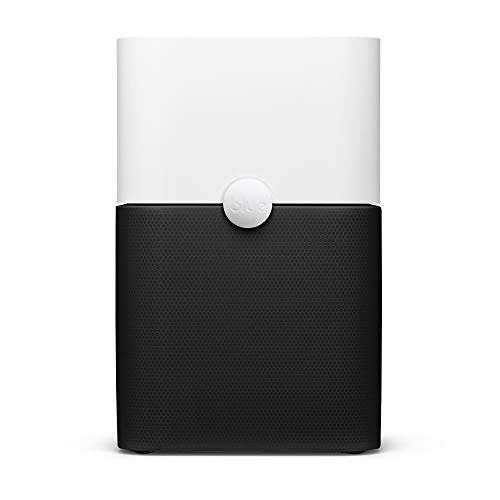 Want the 2-pack? CLICK HERE to see the 2-pack price on Amazon.

You can also buy this air purifier at Home Depot.

Thanks for checking out my Blueair Blue Pure 211+ review.

I would buy it again because it has helped clean the air in our house, and it has removed the wildfire smoke smell.

In summary, it has done what we wanted it to do.